Cardiff is a city of approx 375,000. At present there is significant development happening across all districts of Cardiff which many local groups have expressed concern about green space decimation, flooding/drought lack of controls, disconnected and isolated communities etc.

HISTORY: Cardiff Transition (CT) began in 2008, running awareness-raising events on core Transition themes, including food, transport and community organizing. In conjunction with Chapter, an arts centre in Cardiff, CT ran a week-long film festival around the themes of peak oil and climate change, incorporating a series of well-attended discussion events. Following the interest these events created, CT invited Rob Hopkins to speak at Cardiff’s Temple of Peace in March 2009.

Following this event, the project expanded its membership and organised into geographical groups (Cardiff West, North and East), which began running projects, some of which were rooted in particular communities and others which operated city-wide. Examples include Cardiff Orchard (mapping fruit and nut trees on public and private land across the city), Canton Carbon Cutters (promoting energy efficiency), Feed the 500 (using “waste” food from supermarkets to cook a free curry for 500 people) and the Cardiff Taffs local currency. Awareness raising continued via a series of speakers’ events and public talks showcasing the progress of individual projects.

In late 2010, CT decided it was time to re-organise its core group and launch the initiative as an official Transition initiative. In 2011, we are registering with the Transition Network.

2012 saw the launch of the Sustainable Cardiff Map and was attended and presented at by Ben Brangwen.

In a post COVID world – we must resume efforts to work between community, industry, council, and voluntary sectors to being about a try Carbon neutral and safer resilient economy. 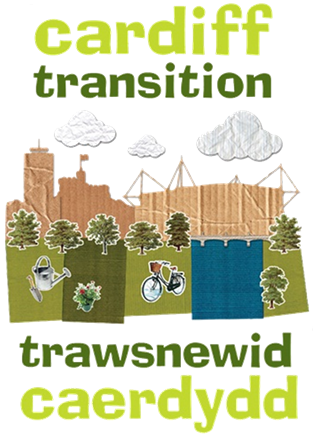